My brother got married earlier this summer so there have been a whole lot of wedding talk and oh so many events! I was a bridesmaid and attended everything but I got to plan the bridal shower. Or is it a wedding shower? It’s not the bachelorette party and I know not everyone has these but basically it is a lot of the females invited to the wedding that gather and play games, eat, and celebrate the bride.

First thing you need to take care of is getting your hands on the guest list. I did want the shower to be a surprise for her and luckily, my brother was super helpful. He got me the list of everyone on the bride’s side of the family so I would know who to invite. Her mom also narrowed it down so we weren’t inviting every single person. I invited a lot of family, except some that lived pretty far and were only coming in for the wedding, as well as some friends, colleagues, and a few family friends.

My favourite part was decorating. I found some stuff on amazon to help make these balloon arches. I also spent a whole lot of time on Pinterest! I set up a special chair for the bride so she could open her gifts there. I also set up a mimosa bar but didn’t get the chance to take any pictures! I’ll have to do that again at another event because I loved it!

For the food, we did easy finger food. Sandwiches, veggies, pizza slabs, pretty standard stuff. I debated for a while if I wanted to get a cake done or go with cupcakes. Pinterest saved the day yet again, as did my mom’s friend with these cupcakes! I made the cupcakes and showed her a picture and away she went! 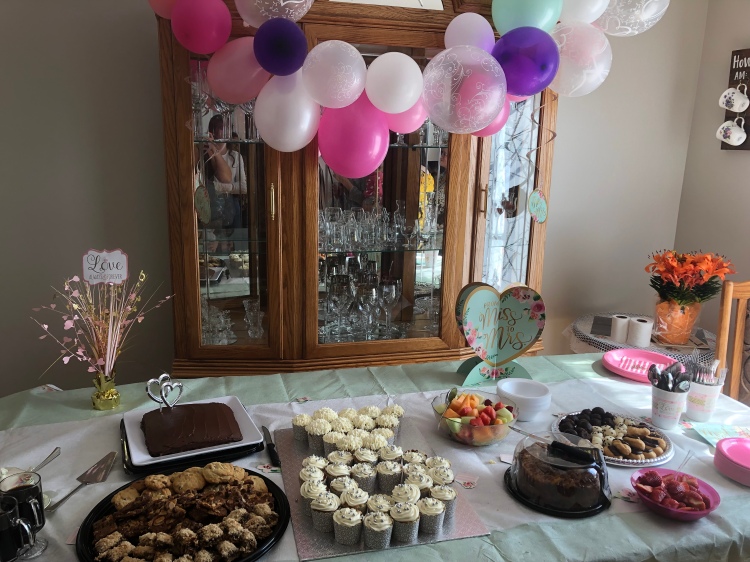 We also did some games but I’ll do a separate post for that! All in all, everything went really well. The bride was surprised and super happy so that’s all that mattered.

Do you guys call this a wedding shower or a bridal shower?

2 thoughts on “Planning a Bridal Shower”