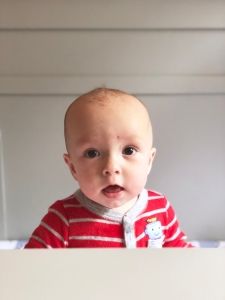 So I know within the last few months I’ve written about how Baby B is always sick, throwing up, being congested, etc., well we finally know what’s going on!

I know it may not seem like a big deal to most, but for the last half of a year, Benjamin has spent it in our arms, struggling to breathe, choking on his milk, and being uncomfortable in most positions babies usually love. He has been passed on from family members for being too “cranky” or throwing up too much on everyone’s clothes.

For the last 6 months, I have barely slept for I would wake with every tiny sound he would make, scared he was no longer breathing. I was judged over and over again for cosleeping with my clearly sick child. I stopped breastfeeding because we thought he had an allergy to lactose, which was causing his “congestion.” We’ve kept him away from people, and inside, because his doctor told us ” it’s winter, babies get sick.” We got criticized for not clearing his nose enough, and for being overprotective when there was nothing wrong.

For the last few months I got told I was “baby-ing” my baby and was choosing a favourite child. That I was becoming the family member that nobody liked. I second guessed my judgment as a parent, and began to feel like I wasting the doctors time.

But here’s where I want to say “TRUST YOUR MAMA INSTINCTS!!” I knew something was off.

After many scans, xrays, scare of an abscess, checking for a heart murmur, and explaining the same story to countless doctors, we finally got some answers! 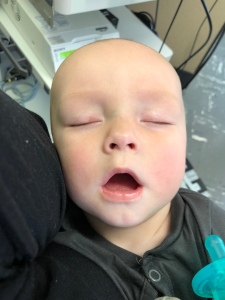 After putting a camera up his nose, we were told that Benjamin has laryngomalacia. He doesn’t make the same noise that babies usually do with this condition so that is why they had such a hard time diagnosing him.

Laryngomalacia is when the tissue above the vocal cords is malformed and floppy, causing it to block the airway when inhaling. We were told that if they just looked at the video they took, Benjamin would for sure need surgery for how badly it is malformed, but because he is doing so well clinically (gaining weight etc,) and since this condition is known to improve during 6-8 months of age, we will wait to see if it continues to improve on its own. Benjamin also has reflux (which is common with laryngomalacia,) so he was put on medication for that too.

Even though he has stopped throwing up formula for the most part, we are still struggling with solids. He either throws them back up, gags/chokes, or his breathing gets really bad after. We may have to go for additional testing when we see his dr next week.

I am thrilled that we finally know what’s going on with our little man, but I still hate this waiting game. The whole bring him back if he “starts to turn blue” really freaks me out. I feel like I need to keep an eye on him 24/7 for we don’t know if/when it could turn for the worst. As much as I know that there are worse diagnosis’s, I hate seeing my little guy suffering and not being able to live his babyhood like he should be.

I will update after our appointment next week. 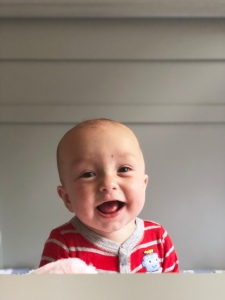 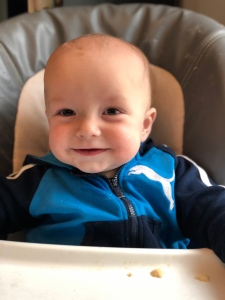 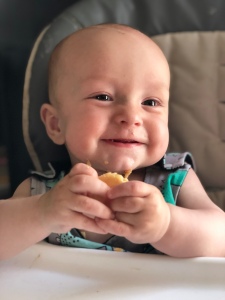