I’ve been wanting to try this activity for awhile but I wanted to wait until Nora was out of the “put everything in her mouth” stage. She’s been much better lately and she’s so curious so what better time than a holiday! I love doing theme activities.

Nora absolutely loves food so I decided to limit the food I put in her bin so there was less of a chance that she tried to eat it. It was also her first time so I didn’t want to overwhelm her with too much stuff. For this bin I used rice, pompoms, and heart stickers. I got everything at the dollar store.

Step 1 of a sensory bin is dying your rice. You don’t have to but it’s easy and makes the bin so pretty! I used the following recipe:

I used 2 cups of rice for the size of the bin I was using. When I was putting it together I decided to add some more white rice as it went well with the theme.

So all you have to do is put the rice in the bag/container, add a few drops of your selected food coloring, and sprinkle the vinegar. Then SHAKE, SHAKE, SHAKE!

Lay it out on the baking sheet that is covered with parchment paper and let it dry for a few hours.

Make sure it’s really dry before adding it to the bin. Once that’s done, you can pretty much add anything to the bin that has different textures and sizes. I gave Nora different size containers and spoons as well to play with.

The only thing was that I gave her a regular sized plastic spoon so she automatically brought that one to her mouth but it totally made sense. So I took that one away.

I laid out a blanket on the kitchen floor for easy cleanup and the first few minutes of watching her discover what I had given her was amazing. She touched everything so gently and twirled the pompoms in between her fingers.

It didn’t take her long to really get in to it. She loved picking up the rice and putting it in other containers. I had to redirect her a few times as she started to throw it after about 15 minutes. She enjoyed dumping it all over her lap too. 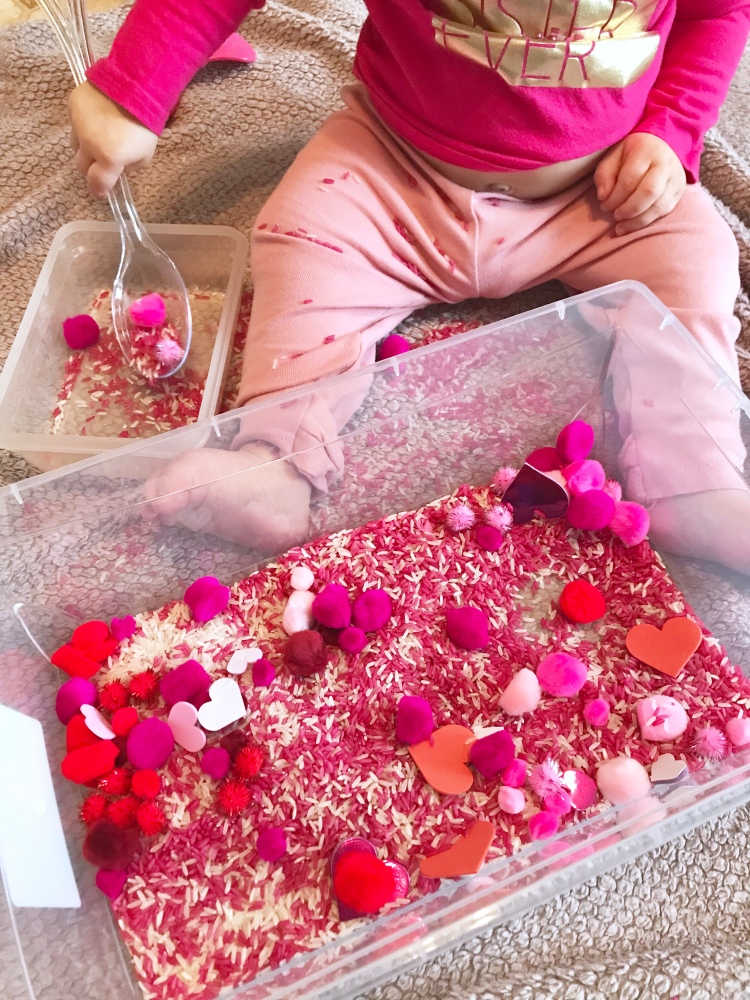 I would say this activity lasted maybe about half an hour but I think that’s pretty good for a 15 month old! I think next time I will add more stuff to the bin that might keep her a little busier and therefore she won’t try to throw it as much. Besides that I think this activity went great! She used so many skills, and that’s why I think learning through play is the best!

What theme should we do next?