I have been using this product for about a year and a half now. Before my reason for using it used to be something I wouldn’t like to talk about and I used to be slightly self conscious about it, but now it’s gotten a lot better and I’ve learned to just live with it. What am I talking about you ask? Bacne aka the most annoying skin condition especially during the summer months. When I first got it I avoided wearing tops that would show off my shoulders (I mostly get it on my shoulder area till about just under my shoulder blade), or I would avoid putting my hair up if I was wearing a shirt that exposed that area.

Initially I tried a ton of crazy expensive creams that claimed to help. At one point I was considering trying Proactiv. I don’t exactly remember why I never did, but it might have been around the time when I started using my face cleanser on my back. Like I’ve mentioned in other skin care posts I use Clean & Clear Essentials Deep Cleaning Astringent on my face every night and it has always kept my face free from any crazy mass breakouts. So I eventually started using that on my back and it was working because it has salicylic acid in it and salicylic acid is key when preventing or trying to get rid of pimples/acne. I used that for years before eventually discovering Body Clear by Neutrogena in Spring 2016. Both my roommate and I suffered from bacne and I noticed that she had a bottle of Body Clear in the shower, so curiosity got the better of me and I squeezed some out into a washcloth and massaged it onto my shoulders and down my back as far as I could reach. When I was out of the shower I asked how she liked Body Clear and she said she really noticed a difference. I used my Clean & Clear product after the shower too just for good measure and the next day I noticed a huge difference. My next trip to Walmart I bought my own bottle and I’ve never looked back since. 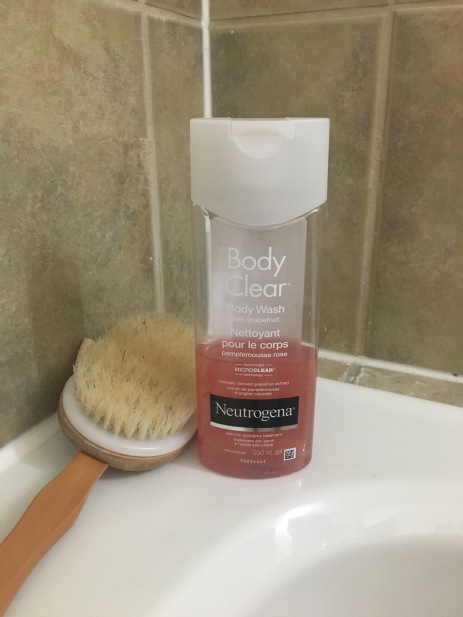 This product has seriously been a game changer for me. I have to use it continuously and I still do use it with the Clean & Clear product, but it really does make a difference. When I do start slacking with it I definitely notice a difference, and then quickly go back to using it. But also my bacne doesn’t bother me as much as it used to. I mean it’s definitely not as bad as it used to be when I was younger, but I also don’t go out of my way to hide my shoulders. I do try to keep my shoulders as bare as possible, so when I get home I’ll change into a tank top and just try not to suffocate the area.

I use the pink grapefruit scent just because I found the unscented one a little bland. May as well have a little bit of fun while trying to get rid of bacne. According to the bottle it’s specifically developed to fight body breakouts like those found on our back, shoulders, and chests. Shortly after I started using Body Clear I soon got tired of constantly trying to reach around myself with my washcloth, so I invested in a body brush with a long handle. It’s a serious lifesaver and it ensures that I don’t miss a spot. I highly recommend using one with this product.

What do you use to clear up your body breakouts?