This week has yet again been a very emotional and draining one. Baby girl decided she wanted to give us a practice run Monday night.

I had been having period like cramps all day long but didn’t think anything of them until they started to get worse and more frequent. I tried everything in the book to get them to subside: warm bath, laying on my left side, drinking water, but the longer they went on, the more I started to panic. Being a first time mom and not knowing exactly what contractions are supposed to feel like, I was hesitant to go to the hospital in case it was nothing. Also, we were not even close to being prepared to bring a baby home yet!

After seeing my mom and fiancé starting to panic, several people on my Facebook support group telling me to go in, and the gut feeling that something was indeed wrong, I called my local maternity ward and was there half an hour later.

When we first got there, the machine they hooked me up to wasn’t reading the pains I was having as contractions, so they thought it was a possible infection. After plenty of tests, uncomfortable exams, and just as I began thinking I was crazy, the machine finally picked up. Sure enough, I was having contractions every 3-5 minutes. Now the doctors begin to panic as well. Being only 32 weeks, baby is able to survive outside the womb yes, but it would be a long and hard journey for her.

After all the tricks they have to stop preterm labour (pills, water,) they hooked me up to an IV, and said it was going to be a long night. Instead of helping, the contractions only got worse throughout the night, but they couldn’t see any signs that I was in fact, in labour. There were no leaks, no blood.

After giving the doctors a few more scares by moving away from the monitors so we couldn’t hear her heartbeat or by having so much energy her numbers would sky rocket out of nowhere, by 11oclock the next morning, she decided it was done. Just like that, the pain and contractions stopped. With still no reason as to why, we got sent home. I am now on rest and lots of water and hoping to keep her in just alittle while longer.

The hills on the right side are my contractions: 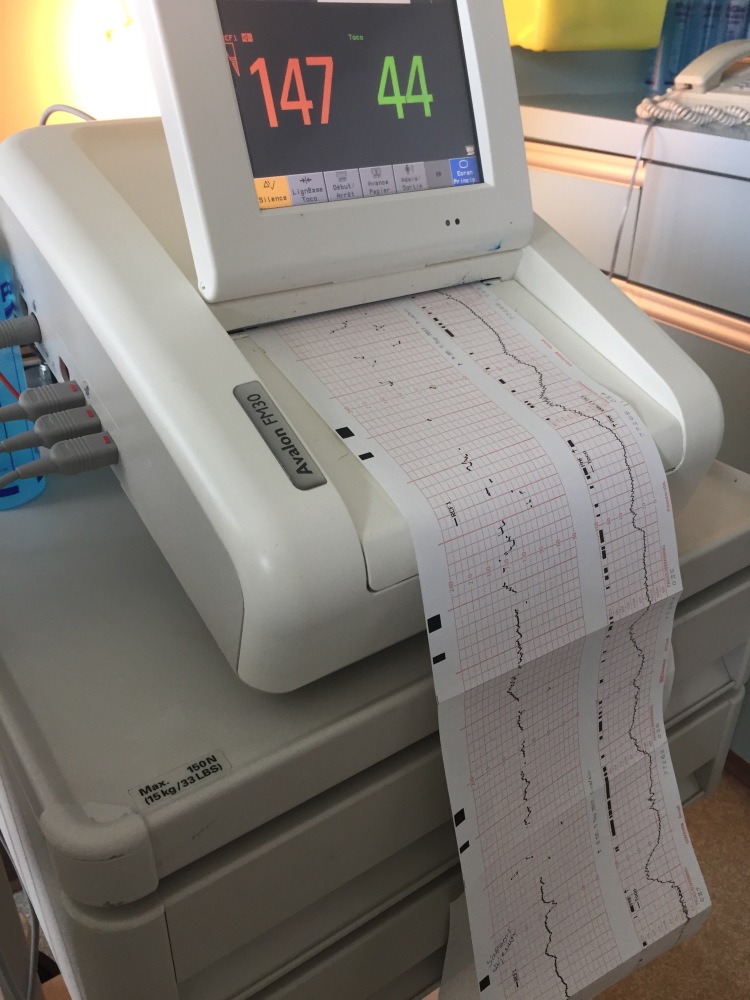 The only thing I felt getting sent home was sad and lonely. For the almost 12 hours we were there, my baby girl has never moved so much! We also got to hear her heart beat for 10+ of those hours. It was so quiet and I felt so lost not being hooked up to the machines anymore. As much as I want her to stay in there for her own good, the other part of me can’t wait! I felt so close to her during that night.

On a better note, our furniture is arriving Saturday (hallelujah!), so now if someone would just tell me when the damn baby shower is gonna be…

The next few days will consist of me telling people what to do in order to begin the process of getting the nursery ready, Yay! I knew I should have started it weeks ago.

This week I am…

Cravings: still drinking hot chocolate and kinda getting the sweet tooth back…

Dislikes: food is making me nauseous since being in the hospital. I’ve tried many different things and it doesn’t matter what it is. Hopefully it passes soon.

Movements: nothing will compare to her trying to kick away the belts around my tummy in the hospital but she has been getting better. She feels like a little fish in there trying to get around. I don’t want to jinx it, but she’s getting better with people around too! We got a nice show tonight at the supper table 🙂

Sleeping: I’m still catching up from the beginning of the week so let’s ignore this one for now.

Mood: I’m kinda scared to leave my house and do anything that will make the contractions come back full force. For once I’m okay being alone with my Netflix not thinking about anything.

Anyone else have scares like this? Or have an early baby?

3 thoughts on “I realize it’s almost Halloween but…”