This was my sample from the March Project pan that I had used up. This is a moisturizer so I usually apply my moisturizer and then move on to start my makeup. As soon as I opened this I hesitated, I didn’t want to put this on my face anymore. The smell was SO strong, I’ve never used anything like it. It was like putting perfume all over my face. The sent was making me feel a little nauseous to be honest. I thought maybe it would fade so I waited about 30 minutes and then I gave up. I went and washed it off because I was so done with that. 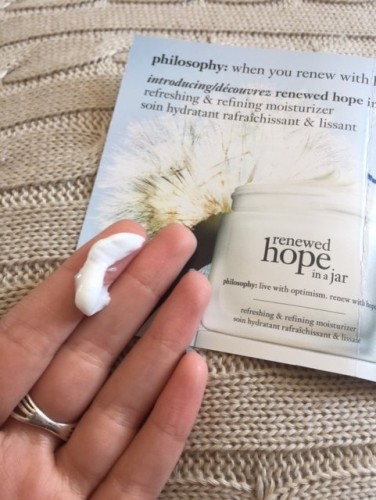 This was the amount I was going to use at first.  Once I smelt it I only used maybe half of that.

I am glad I tried it as a sample and didn’t pay money for that. If I did I would have returned it as soon as I could! I clearly will not be going out and buying this product. Maybe it works for others but I won’t even be using a free sample version of it again. I hate to write a negative review but this is my honest opinion, unless the scent doesn’t bother you I wouldn’t recommend this moisturizer.

Has anyone else had an issue with this one?

One thought on “Renewed Hope in a Jar Review”