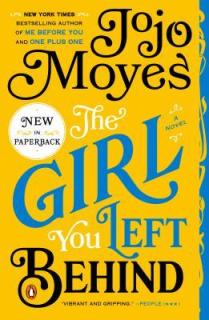 Written by the bestselling author of Me Before You, Jojo Moyes leads her readers through two storylines in her book The Girl You Left Behind.
It’s 1916 and the Germans have taken over France. All of the men have gone to fight at the Front leaving their wives at home with the children. Sophie Lefèvre, wife of the famous artist Édouard Lefèvre, is struggling to keep her children alive as their food has been rationed and it’s been a hard winter. That is until the Germans invade their small town. They eat dinner at the Lefèvre’s hotel every night and Sophie is forced to serve them. Then Kommandant sees a portrait in the hotel that Édouard painted of Sophie and becomes obsessed. A century later, Liv Halston wakes up every morning to the portrait titled The Girl You Left Behind in her house in London. A wedding gift from her late husband she cherishes it dearly. When the painting’s location is discovered a legal battle begins and Liv is faced with something she loves so much possibly being taken away from her all over again.
The Girl You Left Behind is about two girls a century apart who were left behind by the loves of their lives for two very different reasons with two very different outcomes.

I was pulled into this story right away. I sometimes find that historical fiction takes a while to build, but that was not the case with this book. The book starts with Sophie’s point of view and it’s such a different world from today that I was instantly sucked in. Then it changes to Liv’s point of view right at a cliff-hanger in Sophie’s storyline. I had to know what happened to Sophie, so I sped through this book ridiculously fast. Don’t get me wrong though, Liv’s legal battle to keep the painting was very intense too. I give the book 5 stars, which is not something I do very regularly, but this book was just that good. It is the perfect combination of historical fiction, contemporary fiction with a little hint of romance. I would definitely recommend reading it if you’re a fan of Jojo Moyes or historical fiction. And I do have to mention that I enjoyed it a lot more than Me Before You.

If you’ve read this book I’d love to know what you thought of it. Feel free to leave a comment!